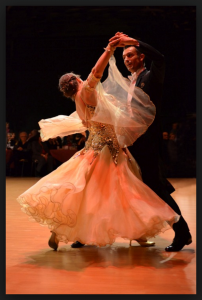 You may have seen it performed in a film, a competitive dancing show, or (if that’s how you roll) at a ball of your very own. Whatever your experience, to most, the waltz represents a conservative dance that radiates classic sophistication à la Cinderella and other timeless fairytales. However, few know very much about the dance’s origins.

The waltz is the oldest ballroom dance, dating back to the Eighteenth Century. Contrary to how it is viewed today, when it was first introduced the waltz was considered quite scandalous. This was because it was the first recognized dance where couples moved in very close positions with the man’s hand around the lady’s waist.

A German folkdance called the “Ländler” is said to have been the dance that the waltz was based on. This dance was set in ¾ time and was popular in Bohemia, Austria, and Bavaria – spreading from the suburbs of these regions to the cities.

The Walzer & the Viennese Waltz

Another dance credited with influencing the modern waltz is the “Walzer.” The word “Walzer” was developed from the Latin word “Volvere,” which means to turn in a rotating motion.

During the Eighteenth Century (more specifically around 1750) peasants in Tyrol, Bavaria, and Styria began practicing this country-dance. And while noblemen of the region initially scorned the close, intimate dance, soon its popularity overtook that of the conventionally practiced social dance known as the minuet. 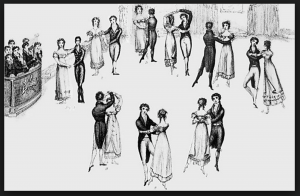 In the mid 1800s Austrian composers Joseph Lanner and Johann Strauss II set the traditional standard for the “Viennese Waltz.” This waltz was faster than the traditional version, set at approximately 55 – 60 beats per minute. The increased speed made the dance more upbeat, but also made it more difficult for couples to keep up with the tempo.

Napoleon’s army is said to have been responsible for spreading the waltz across Continental Europe from Germany to Paris. The dance later reached England by 1815 and then finally made it across the Atlantic to the USA. 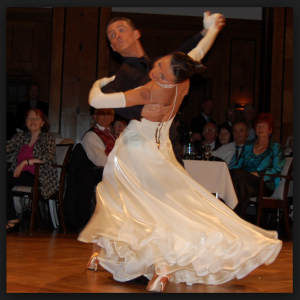 The first modification was known as the “Boston Waltz.” This waltz was much slower than the Viennese Waltz – involving long, gliding motions. The Boston Waltz also had fewer steps, slower turns, and more forward and backward movements than its predecessor. Meanwhile, the second modification of the Viennese Waltz was the “Hesitation Waltz.” This dance was characterized by taking one step to every three beats of a measure.

The Boston Waltz would later develop into the official “International Style Waltz” that is still practiced today. Though there also remains a more American variation of the dance: the “American Style Waltz.” It is fairly similar to the International Style Waltz, except for the fact that it has open dance positions. The Hesitation Waltz, however, is no longer danced in full in the modern era. However some of its basic step patterns are still utilized.

Both the traditional Viennese Waltz popularized by Lanner and Strauss, and the slower International/American waltzes are practiced and beloved in ballrooms across the world today. They are the elegant numbers we fawn over on Dancing with the Stars, the beautiful scenes we see in fairytale films, and (in my humble opinion) the whole reason behind the ball gown department of any Bloomingdale’s or other women’s clothing store out there.