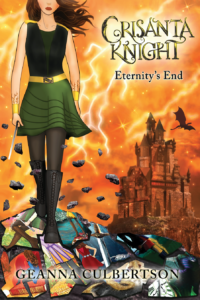 “Our enemies are prepping for the culmination of their plans, we have powerful allies in multiple realms, my magic is stronger than ever, and we’re in a position to cross worlds and find the girl that’s key to all of this. Seems like a good time for a finale, don’t you think?”

In this epic conclusion to the nine-book fantastical series known for its soulful storytelling, exceptional world building, and heroic, inspiring characters, join Crisanta Knight and her allies as they fight for happily ever after—for themselves, the ones they love, and the many realms they have impacted.

Returning from her harrowing experience on Earth as a more powerful and more dangerous version of herself, Crisa must redefine her role as a hero, princess, leader, and human girl amidst realms on the brink of chaos and a slew of story arcs about to collide in climax. So put your dragon in park, holster your wand, and strap in for an adventure worthy of the term FINALE. The stakes have never been higher as the antagonists move to execute the final phase of their plan for the realm of Book and greater magical universe. Crisa and company will face them head on and attempt to conquer external and internal adversity as they push to truly live up to the role that started it all—Protagonist.