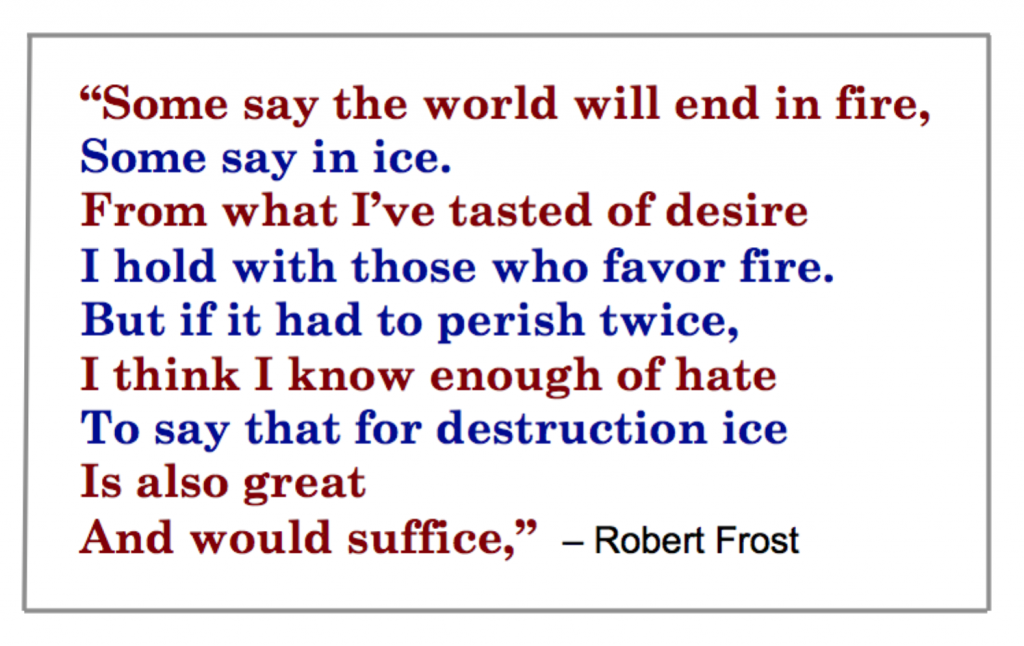 I never liked this poem.

No offense to my man, Robert Frost—his poem “The Road Not Taken” is practically my jam—but I’ve always just found this particular bit of writing to be too dark.

When my 8th grade English class first analyzed the poem long ago, I immediately had one question in response to Mr. Frost’s proposed viewpoint. Isn’t there another way?

My professor, a soon-to-be-married woman who always seemed to be in a good mood, described how the “fire” in this poem symbolized a form of chaotic destruction for the world, like war or your average bloody, violent equivalent.

Conversely, the “ice” could be a form of much more subtle, cold devastation. Students in my class suggested that maybe this could be referring to a natural disaster like the ice age, or a man-made virus, or even just some form of cruel intention that backfires and leads to our own demise.

Heavy stuff for a class just before lunch.

Anyways, who could say then and there which of my classmates had best analyzed the specifics of Mr. Frost’s beliefs. Poems like this can be interpreted in so many different ways, after all.

Based on his phrasing, for example, I always thought Mr. Frost was referring to his world, not the general one. Or maybe it was each person’s individual world?

I don’t know. What am I Shakespeare? I may be a writer, but I am not about overanalyzing things that don’t matter. And this poem—at least the general theme expressed therein—doesn’t matter to me. It is inconsequential because I disagree with the sentiment behind it.

Mr. Frost’s poem expresses a darkness that I have never believed in.

Throughout my life I have been hurt. I have known pain. I have hated. I have had my heart ripped from chest evil queen style and been forced to go on, despite that tear in my soul. But I have never, not once, ever believed that the whole world, any individual person’s world, let alone my world, has to end in either fire or ice.

There is another way.

No world or life is set on a path of inevitable destruction. There are dark times and hard times. Bad things happen; sometimes by our own hand and sometimes without our provocation. But the world turns on. We don’t have to be defined by the darkness. There is always another path and the possibility of a brighter future.

As such, I would like to propose the following:

It is the third option. The one that the more serious, somber, and self-destructive part of our culture would rather bury beneath viciousness, selfish agendas, and Schadenfreude. But, just as doggedly, it is an option that can never be extinguished.

Life is full of too much wonder and light and fun to be written off by pretentious cynicism. We can be better. We can be brilliant. We can lead lives that shine and sparkle.

There will be hard times along the way. They’re more guaranteed than a complimentary breadbasket at an Italian restaurant. But they don’t have to be the end of the world if you choose not to let them be.

Throughout my life I’ve chosen to proceed under this principle. It, in turn, has helped fuel my relentless drive for chasing my dreams, pushed me to be more, and inspired me to live every day with my heart and head working in perfect synchronicity under the ambition of getting where I want to go in life and enjoying every step along the way.

This, dear reader, is the Path of Glitter. Now, take my metaphorical hand and let’s journey down it together, shall we?