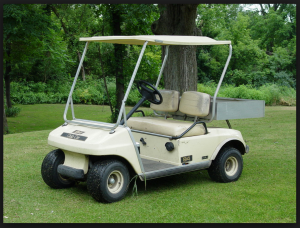 In my adventures I have found that golf carts and I, when combined, lead to some pretty interesting, precarious times. The following is an account of two such exploits, the likes of which are kind of ridiculous, but also oddly true.

Like, seriously; I may be a YA fiction and fantasy writer, but this chiz is not make believe.

The Location: The Exumas — a subset of islands in the Bahamas.

The Atmosphere: In a word — Gripping 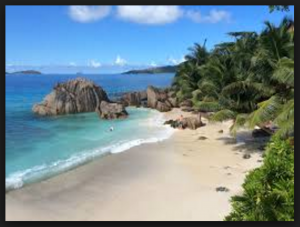 The first five days of my family vacation had witnessed the most beautiful of weather.

Blue skies, relaxed, turquoise waters, a bright sun that shimmered on the surf and made the colors of every tropical plant glow with radiance—yes, the Exumas had been paradise. Until day six, that is…

The resort I was on had a grand golf course that stretched across the entire island. I had been headed there to meet my brother for a round of the sport. I did not like golf (it was too slow-paced for my taste) but I did like spending time with my brother, so I told him I’d come along.

Having lost track of time when I was doing my Little Mermaid bit in the ocean, I was running about twenty minutes behind. Texting my brother, he told me that he had gone ahead on foot, but I could grab a golf cart when I arrived and drive the course until I caught up him.

I was moving with such a haste to get there, I did not notice how quickly the skies were turning dark. By the time I arrived at the entry to the golf course the sun was gone—hidden behind 15 shades of gray. 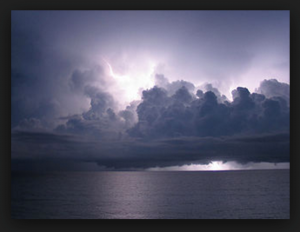 There was one golf cart available at the time, but the caddy on duty told me he would have to come with me if I wanted to drive it, as the trails ahead were complex.

The caddy creeped me out slightly. He had an accent I couldn’t place that sounded like a cross between Jamaican and Texan, and the hole between two of his teeth whistled when he talked. Regrettably, I had no other choice but to ride with him, because that’s when the storm warning was issued.

Apparently lightning was approaching the island at a shockingly fast speed. Once I learned this, it took me about two seconds to properly grasp what that meant.

Holy bananas! My bother is holding metal golf clubs and standing near the metal pole markers of golf holes somewhere out there.

Afraid for him, I switched to action mode. I hopped into the front seat of the cart with the caddy riding shotgun and pressed down on the gas. 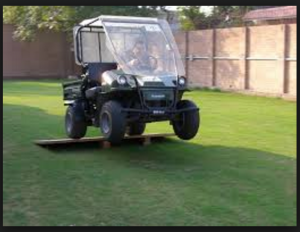 Now, I feel it’s important to note here that this was actually my very first time driving a golf cart. I’d ridden in many before, but had never physically been the driver. I just figured that between my actual car driving skills and Mario Kart experiences, that would be enough to compensate.

The result was mixed. On the one hand the whole time I drove I felt very unstable. However the conditions surrounding the circumstance escalated so quickly that I think some Die Hard-esque adrenaline imbued be with the skill I shouldn’t have had.

About twenty minutes into the adventure I was on the other side of the island near Hole #9 and had not found my brother. Meanwhile, the storm was coming in fast. It started to rain at that point and (since golf carts don’t traditionally have windshield wipers) my entire front view was warped by the water splashing against it.

Suddenly the lightning started. White, angry crackles seizured across the sky violently. I executed a sharp right turn to avoid driving into a mudslide that occurred in the road. The caddy and I were forced to take a detour off course.

Previously undisturbed plants thrashed against the cart as its wheels sped over uneven dirt and stone. The lightning was getting louder and more frequent. And we were running out of gas.

That’s when the wild dogs appeared…

So, apparently wild dogs were a thing in the wilderness of this island, because just as the caddy and I were trying to escape the storm chasing us, they too were making a break for higher ground. About six to eight miscellaneous hounds (I can’t be certain as I didn’t exactly pull over to Instagram it) began running behind our cart.

Punch it! I mentally yelled at myself.

“Hang on!” I actually yelled at the caddy. 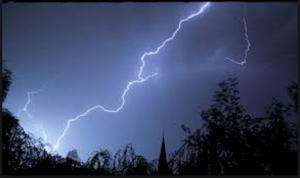 We took off anew to the sounds of barking dogs and more lightning. After a minute I saw an entryway back to the main path and turned onto it. The dogs followed, but here I was able to make the cart go faster.

I continued the search for my brother while monitoring the mutts and doing my best to get us back to the front of the island. As the caddy and I zoomed past the remaining holes, he gave me live directions. I listened while wiping my hand across my face to keep from being blinded by the rain. The amounts pouring on me were so thick you’d think I just sat in the splash-zone of a Sea World show.

Finally, we bolted over the bridge that took us to our final destination. The dogs pulled off our trail and dashed into the surrounding marsh. I swerved the cart in front of the main building and pumped the brakes—slamming us into an open parking spot.

The caddy and I jumped off the cart and raced down the street in different directions. He was heading for the hotel lobby. I was aiming for the hotel bungalows hoping to take cover in my room and find my brother in his as well. Alas, I never made it there. The water and wind and lightning were so strong that I was forced to duck inside a café.

I was alone except for a barista reading a magazine behind the counter. I had no cell signal, but I was able to use their landline to call my brother’s room. He was, in fact, safe and sound inside his room—he had been there for the last half hour. When he’d seen the storm coming he’d left the gold course, but had just forgotten to tell me.

Great. Thanks for the heads up, bro.

Trapped in the café until the storm blew over, I ordered a pastry, broke out the Sherlock Holmes book in my backpack, and pondered the madness that had just unfolded.

The Young & The Reckless 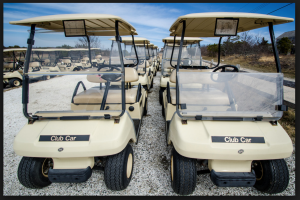 I have worked at several studios in my life, and also spent brief amounts of time at a few others that I don’t often talk about.

The following story takes place at one of these studios, and it is quite epic.

I warn you though, while I am glad for the story it provided, do not try this at home (or anywhere else for that matter either). I would be lying if I said the experience wasn’t fun, but I would also be lying if I said it wasn’t stupid.

One brisk winter morning in years past I found myself on a studio lot. The building I worked in provided employees access to golf carts, which, of course, made me smile. However, after the aforementioned storm chaser story, I wasn’t entirely comfortable driving a golf cart in the heavy, mixed traffic of a poppin’ studio. Thus, I elected to practice in the early morning before the normal workday began.

I put this off until one fateful Friday when shockingly light traffic through downtown got me to the studio at seven o’clock. It being so early, the studio was all but deserted. Thus, I decided it was the perfect time for my long-put-off golf cart test run.

Excitedly I grabbed the keys and settled into a cart. Pulling out gingerly, I proceeded down the vacant studio alleyway at microscopic speeds. For about ten minutes I drove carefully, practicing turns, parking, etc. until I felt comfortable enough to increase my speed to a non-snail level.

Over the course of the next few minutes I slowly grew my skill, confidence, and speed until all my nerves rescinded. I didn’t know what I was so worried about. I was good at this. Moreover, I was having a great time.

The air smelled of coffee and bacon, which I imagined was wafting from the lot’s coffee shop and cafeteria across the way. That combination was a compelling odor, heightening my already chipper outlook on the day. Yes, everything about this was grand. All senses were a delight. And that, naturally, is when I got carried away.

It’s hard to say whether it was the thrill of vehicular mastery, the confidence that comes with nobody watching what you’re doing, or the sheer joy that often infested my spirit on Friday mornings, but (for whatever the reason) I suddenly felt the urge to “gun it.”

My combat boot pressed down on the gas pedal further and further until it was completely on the floor. 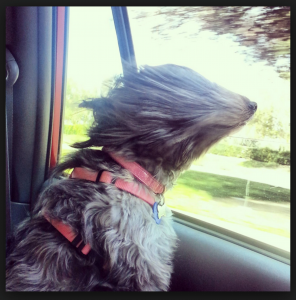 I zoomed in and out of alleyways across the lot—wind flapping through my hair, cold slamming against my face, and not a soul around to witness my fast & furious adventure. It was exhilarating… until I came to that fateful sharp right turn.

One of my favorite parts of this studio (like all the others I’d been to) was that they had a small section of lot dedicated to filming, which indefinitely was modeled to look like New York City.

I loved these areas, and often liked to stroll through them. But, while strolling through such deserted streets was peaceful, zipping through them on a golf cart was precarious at best.

Small apartment buildings, fire escapes, and worn down store fronts blew past me. I was intending on continuing straight; up ahead “Little New York” let out into a direct shot back to my building. But all of a sudden I saw a truck in the distance pull into my path. The only other option, therefore, was to execute a quick right turn into the adjacent street.

Now let me just say that if I had been any less in shape than I was at present, I would have gotten seriously hurt. At that speed and angle, with no seatbelts or doors to support me, the turn was so hard my entire butt and body lifted off the seat—the force careening my body outside of the cart.

Thankfully, I held on.

My arms stretched to maximum capacity; my hands gripped the wheel and kept the turn going while I harnessed all of my strength to keep from flying out of the cart and keep the cart from flipping over.

Somehow, I managed to achieve both. A few terrifying seconds later and the wheels leveled out and I thrust my body back into the cart.

Whoo, that was close. Thank you, core strength. 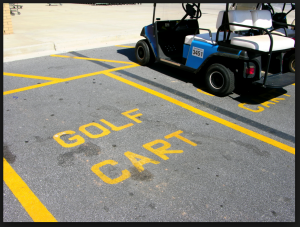 Very aware of how dangerous these shenanigans of mine had been, I slowly and carefully drove the cart back to where it belonged.

Then I parked, put the keys back, returned to my desk, and began checking my morning emails like nothing out of the ordinary had happened while mentally lecturing myself about my own reckless behavior.

Needless to say I took away my own golf cart privileges for the foreseeable future. Apparently that mode of transportation and I do not mix well. Makes for some good stories, but still pretty dicey. 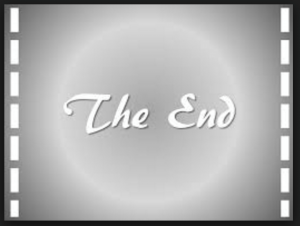